Home Chess Tournaments Chess For Peace
SHARE
Facebook
Twitter
I know it is a strange title but that is what this event was called by the organiser – Rehema Maria and the sponsor Universal Peace Federation.  The event was held on 12th May 2012 at the premises of Universal Peace Federation, which is situated along Haile Selassie Avenue, Nairobi.
I did not go for the event mainly due to the fact that I dreaded the horrible traffic jams around that area especially on a Saturday afternoon.  This means that there are no photos of the event just yet.  I am hoping someone would put some up and I can present them on this blog.
For those of you who want to know who is this hard working lady in Kenyan Chess here is her photo taken on 3rd March 2012 at one of the recent league matches.  She played for Mighty Pawns and won a prize.  Well I was feeling lazy and so I have copy pasted her story for all of you to read.  Well enjoy and from my side I say a “Big Salute to Rehema”. 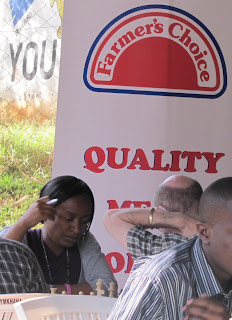 “Chess For Peace event went down well last Saturday. We had 32 guys participating in the mini tourney, 5 of them being ladies. It was a 6 rounds event, with a time limit of 30 minutes per game.
The UPF – Universal Peace Federation extend their gratitude for your participation, and will, hopefully, stage another Chess For Peace (C4P) series.

The notable presence of ICKC by Dr. Victor Ngani and Githinji Hinga, shows, clearly, that there are better times to come. We are humbled, and grateful for your support and encouraging remarks.

Thanks to all who assisted us with chess boards and clocks, as well.

I hope those who came enjoyed themselves. We now understand what it means to organize for a tournament – it comes with its equal share of challenges.