This week my favorite chess photographer David Llada (http://www.davidllada.com/) had a fantastic photo of an old hero of mine – The Indomitable Lion Viktor Lvovich Korchnoi.

Many chess players of course know Viktor Korchnoi but I think it is only those born in 1960s and before will appreciate why I call him an Indomitable Lion.

Those who want to read about him should check out – https://en.wikipedia.org/wiki/Viktor_Korchnoi  In fact even better is to go and read his book “Chess is my Life” by Batsford.
I remember his 1978 match in Manila, Philippines against Karpov very clearly.  In those days our local newspapers hardly reported on chess and we had to wait for the weekly article by Rashid Mughal to appear in the Friday Daily Nation.  I have shown a sample of such an article. 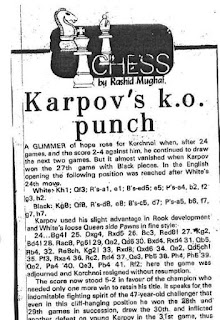 Many of you will ask why Manila of all places in the world.  Well in those days we had another mighty and powerful chess figure – the late Florencio Campomanes who was from Philippines and was President of FIDE from 1982 to 1995.   He was a close friend of the late President Ferdinand Marcos of Philippines which explains why the event was held in Manila.
See http://en.chessbase.com/post/florencio-campomanes-dies-at-eighty-three
I was a bit lucky as we had a friend who used to receive the foreign newspaper “The Times” and that is where I would try to see what was happening.  It was difficult and tough.  I remember one time I had to write out the game in one of my books.  I wrote it in my Fischer v Spassky book which was the second chess book that I owned. 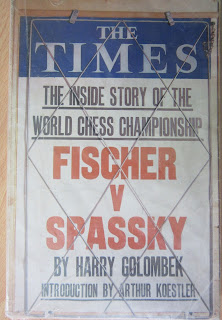 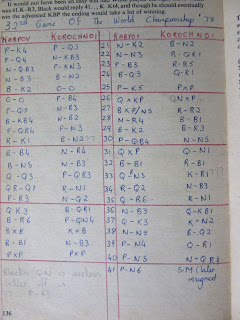 1978 was the height of the Cold War and for me the USSR (Union of the Soviet Socialist Republic) was the Evil Empire and I really wanted Victor Korchnoi to win the World Championship Match.   Anatoly Karpov of course was the poster boy for the might Soviet Union at the time.  For the USSR he had to defeat Victor Korchnoi who had defected in 1976 and tarnished the name of Mother Russia.
The USSR refused to give permission to his wife and son to leave for the West and poor Viktor had to play Karpov with all this on his mind.  Talk about chess being played off the board.
You will recall that we faced a barrage of propaganda from our local newspapers about the evils of the USSR and communists in general.  Our other source of information was only Newsweek and TIME magazine and hence we only saw one side of the story.  In the 1970’s Kenya was firmly in the side of the USA/UK and the communist spheres of influence were clearly defined on the African continent.
The question that I have in my mind is – Would Korchnoi have triumphed over Karpov without all the drama on the side of yogurt, Dr Zukhar, Yogi Masters etc.   I recall feeling absolutely crushed when Korchnoi was defeated by a narrow margin of 6-5 with 21 draws.  Why did it have to be this way?
I have a copy of Viktor Korchnoi’s book “Chess is my life” where he has a detailed autobiography and which covers the period to 1976 and unfortunately not the 1978 match.  It is a gripping story and has a number of his games.
They had a return match in Merano, Italy 1981 where Karpov crushed Korchnoi 11-7 in what they call “Massacre in Merano”.  I could not care any more.  My Hero was unfairly crushed in 1978 when he had the best chance even though the odds were heavily stacked in Karpov’s favour due to off the board tactics.
I must however admit that Anatoly Karpov eventually earned my respect in full when I started to go through some of his games.  He is absolutely brilliant and his games are so much fun to go through.  I have two of his books but this will be the story for another time.