I know that many chess players love wooden chess sets and I am no exception to that rule.

I however still love plastic chess sets and collect some nice ones whenever I come across them. 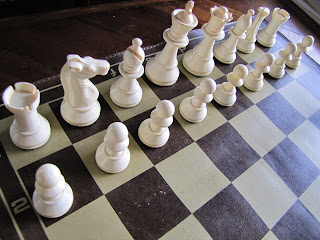 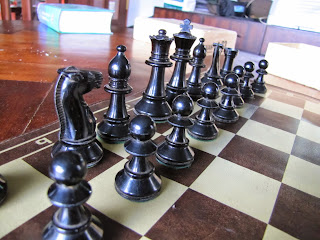 This set has a special significance to me.   Many years ago probably around 1985/86 one of Kenya’s best players Saif Kanani was at the St John’s Building where chess players used to meet every Sunday afternoon and every Wednesday evening.  It was nice spot in those days.  You parked your car outside (no worry about theft/parking fees etc).

The atmosphere was pleasant and typical of any chess club around the world.  It was small and could hold approximately 20 players very comfortably.  Most of the League games would be played there.  We had a small cupboard where all the chess sets and board were kept.

I have started to digress!

Anyway Saif Kanani (see photo above from Aslam Adam of UK who is seated on Kanani’s right.  Saif is the one with the spectacles sipping a drink) one evening told me that he was donating the chess set to me!  I had never asked for it and I am most grateful till today for this set.  It is one that has been used over and over again.  However these days I hardy get any time to study chess but it is one of my favorites.  He had given me the pieces only and I managed to get a nice small roll up board which fitted nicely with the set from a shop called “Hobby Centre”.  In those days there were only 3 toy shops in Nairobi – Toys Bazaar, Toy World and Hobby Centre.

The only toy shop that seems to have survived the tough 1990s is Toy World who now have 4 branches in Nairobi. 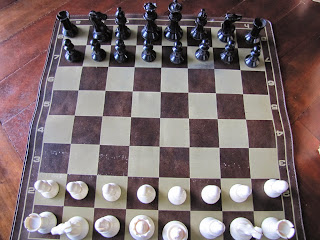 I decided to do a bit of research on this set and I think that I have a set of chessmen in the wrong box!  It appears that “Rajah-Skah 83” is a wooden chess set from India!

The question that I have is – What type of chess set is this?