I guess this report is a bit late but then I can you can excuse me as I had to battle 2 and a half hours to come back home on Mombasa Road with all the traffic and trucks.

The much awaited 4th edition of the Daystar Open got off today morning to a shaky start.  A total of 135 players made the tough 40km drive to the dry Athi River Campus of Daystar University.
The major hitch appeared to be the non-delivery of the chess clock which must have caused Chief Arbiter Duke Micheka a massive headache!  A second headache for Chief Arbiter was the sudden appearance of 14 junior players who had come to enter the event.  A small misunderstanding as this is how it used to be in the past.  You just came for the event on the day itself registered and played.  Kenyan Chess has moved in the past 3 year.  You now must register online and pay by Mpesa before the day.
There were a number of walkover mainly due to the fact that many players arrived late at the venue.
By the second round things had settled down and running like a clockwork.
The event has been graced by 4 Ugandans and including Arthur Ssewanyi who returned from the 2015 World Cup held in Baku, Azerbaijan, IM Elijah Emojong, Haruna Nsubuga, & Bob Bibasa.  Incidentally Bob was missing in action by the time I left so I am not sure if he did surface. 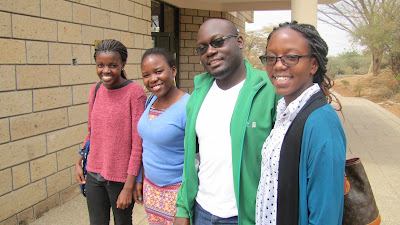 It is a pity that both Arthur Ssewanyi and Elijah had to play in the Open section due to the fact that their rating is above 2200 which made them ineligible to pay in the Prestige section. 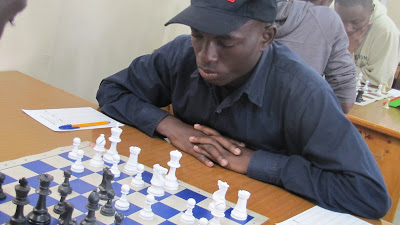 One of the charming things about Kenya is that we are home to many foreigners from our neighbouring countries.  Not to be left behind is a strong South Sudan 7 man delegation led by non-other than Mr James Madol Panchol who won the Open section at the recently concluded 57th Nairobi Chess Club Championship. 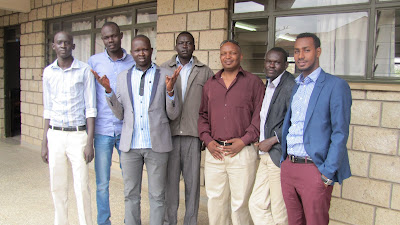 There have been some upsets with FM Steve Ouma losing his first two games to Victor Hongo and then to Martin Oyamo.  The other major upset was when George Ochieng defeated veteran John Mukabi.
Ben Magana who is a favorite to win the title had a tough Rd 1 when he as paired against Ronald Lwebuga from Sierra Leone.  In the end Ben’s aggressive style of play paid off.
Missing in action in this fantastic event was Peter Gilruth and noise maker Mehul Gohil.  Both of them are part of a team that travels to Kampala, Uganda for the 4thedition of the Migingo Cup.
My predictions for this event are as follows;
Prestige Section: Ben Magana, defending champion Githinji Hinga, Kenneth Omolo.
Opens Section: Arthur Ssegwanyi, Elijah Emojong.
Ladies: Ivy Amoko.
I bring you some photos of today’s action for you to enjoy.  I will not be present tomorrow to give you any updates as I will be at Ngong Racecourse looking at beautiful cars at the Concours D’ Elegance.  I might put up some photos if I can arrange with one of my many friends to send me some photos.
Once again – Big Kudos to Daystar University for putting up this amazing show.  This is the way to go!

50 years ago, the USSR was battling the Rest of the World