The one thing that chess players do whenever they travel is to visit the local chess club. I thought life would be so easy with www.google.com but realised that there were no clubs coming up on my search pages.

I decided to send an email to the hotel that I had booked and I got a quick response with an email and telephone contact.  Only then I reaslised that one needs to look for a chess club in the same language as what you are looking for.  Very often chess clubs do not have an English page.

I was very lucky in this story.  I got a quick response from the Istanbul Chess Club within hours to my email and the great thing was that there was a chess event scheduled for the days that I was going to be around.  Lady Luck was smiling down on me!

In case you want to visit the club the address is shown below; 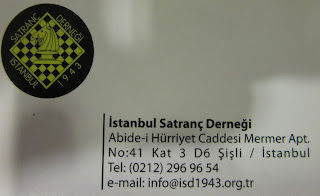 Getting to Istanbul Chess Club

I do hope that Google will direct queries in English on the Istanbul Chess Club to my blog site which would be a great help to many other English speaking tourists.
The best time to go in my mind would be after a full day of sight-seeing with the family.  I did not want to risk dragging them looking for a chess club!
The one thing that you will notice in Istanbul is that the taxi drivers are an annoying lot at most times.   Going to Istanbul Chess Club proved the point one more time.
The taxi driver claimed that he could not find it and then he used his phone as a GPS to see if he could find it.  Eventually he tells me that this is the place.  I look around and all that I can see are shops and restaurants.  Most of the drivers do not speak English so it is next to impossible to understand what he is trying to say.  Eventually it registers that this is the street that I want to go to and that I should now ask for the exact building.
After searching for like ten minutes I managed to find it on the 3rd floor of a building and as luck would have it the President Mr Arno Garabetyan was also around.  The tournament was in full swing and Round 5 was in progress.

This event attracted a total of 31 players and was in honour of a former President of the Turkish Chess Federation the late Hayri Özbilen.

The club has 3 rooms, a small office, kitchen, bathroom a long corridor.  They meet 6 days a week from 1 pm to around 10 pm and have a manager who looks after the place.  I am of course green with envy.  Why can we not have a club like this in Nairobi?  It would be so cool to go to chess club once or twice  a week straight from the office.

The closest that we ever got to a proper functioning club was with ‘Checkmates Chess Club‘ along Tubman Road.  The sad news is that that particular club closed down when the pub/restaurant closed down many years ago.  Chess players have been in limbo ever since without a real fully functioning chess club.  We do have Nairobi Chess Club that meets every Saturday afternoon, there is an informal group that meets at Kenya  Motor Sports Club and another one at the Kenya Polytechnics (now known as Technical University of Kenya).
I bring you some photos of this event so that you can enjoy the club atmosphere.  I would have loved to stay longer and bring you more details.  Perhaps next time.

For an update on this event please visit – Standing & Results of the event.

Membership for the club is just under USD 100 per year.

My other article on chess in Istanbul can be found here – White Bishop goes missing in Istanbul!