This is my second and final post on the 2015 African Junior Chess Championship which was concluded earlier this month in the beautiful island of Seychelles.

The great thing about the African Junior Chess Championship is that Kenya has hosted this event three times!  This was in 1992, 1993 and in 1998.  Another point that many forget is that winners of the Africa Junior get an IM title and one GM norm.

Getting information on the past African Junior is extremely difficult and I have attempted to create the database for this prestigious event.

I bring you some rare photos of these past events and of course photos from Seychelles.

For starters we have a the game of Kenyan representative Joyce Nayaruai 1469 against 2013 African Junior Chess Champion Esperanca Caxita of Angola who was rated 1764 a massive 300 Elo points higher.  For your information Esperanca was the 2013 Africa Junior Champion so it was not going to be easy for our Kenyan star.

Joyce’s move of 16……g5 weakens her King side and this leads to White moving swiftly to take control of the King side.  On 27…….Nb7 is a blunder that leads to a loss of a piece.

Now for some historic stuff.

I have a newspaper article for the 1998 African Junior Chess Championship which took place in Nairobi.

I guess the question on everyone’s mind is – when will Kenya host this event again?  I would really pray that the bigwigs of Chess Kenya and the ministry officials put their heads together to bid for this event which would go a long way to promote the game in Kenya. 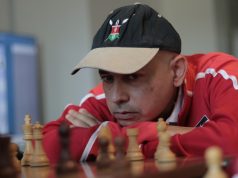 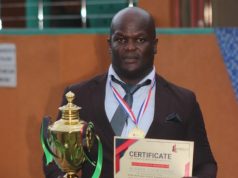 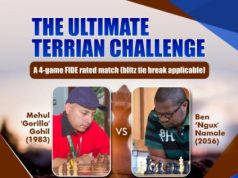