Tell us the story about how you became the first Kenyan to defeat a Chess Grandmaster.

In 2007, that indefatigable chess slave, Isaac Babu (Team Manager KCB Chess), decided to do something different for me for being a loyal KCB player.  He pursued and secured sponsorship from the bank for me to play in the 2007 African Individual Chess Championships held in Windhoek, Namibia.  I was a bit overwhelmed by the level of competition at this chess showpiece.  In round one, I played my first-ever GM Amon Simutowe from Zambia, aka ‘The Zambezi Shark‘ – he bit me in half.

I was then paired in round 2 against the top seed of the event, GM Ahmed Adly of Egypt. (Incidentally, in 2007 Adly was also the World Junior Chess Champion – so technically I was playing a World Champion).  I did not have the capacity to feel fear, I was just numb and strangely serene.  I played a whale of a game, outwitting Adly to steal a pawn and a better position. Out of respect for the bearer of the GM title, I offered Adly a draw from a position of strength.

He sneered and banged out a move. I felt insulted and avoided a repetition and started playing for a win!

My middlegame was of a high order,  bringing GM Adly closer and closer to the precipice.

In a last act of desperation, he offered a draw in a lost position. I snorted and banged out a move. He resigned in ignominy and ran out of the room, tear drops balancing on his eyelids.

PS: Adly went on to win 6 games in a row and draw the last one, finishing joint 2nd behind winner, Zimbabwe IM Robert Gwaze, and qualifying for the World cup.  Unfortunately for Gwaze, FIDE had not yet introduced the awarding of automatic GM title to winner of AICC otherwise Gwaze would be a GM by now, and a deserving one at that. 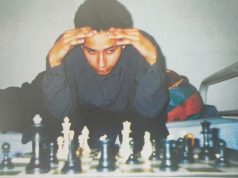