Egypt stun host Kazakhstan by defeating them in their encounter in Astana during the 2019 World Team Championships.  The final score was 2.5-1.5 points in Egypt’s favour.

13th March 2019 saw the penultimate eighth round of the event.

Fawzy Adham scored his maiden victory of the event by defeating Murtas Kazhgaleyev on board 3.

Denis Makhnev of Kazakhstan defeated Hesham Abdelrahman on four board for a consolation win.

Adly Ahmed managed to obtain a draw against Anuar Ismagambetov on board two to seal the match victory.

The Russian national team won the Championship with one round to go when they defeated Sweden 3.5-0.5. (Grischuk, Andreikin, and Artemiev won, while Karjakin drew).

Head coach of the Russian national men’s team, RCF President Andrey Filatov was delighted and had this to say. “It was a tough & very emotional victory. This Championship has shown us that the chess players’ level has increased and that any team can spring a surprise. Not everything worked well for the rating favourite – the Chinese side, but our chess players were playing brilliantly. We have a real, united team. Our newcomer Vladislav Artemiev made a significant impact on our success. It is delightful to bring gold medals for your country, and this is a beautiful feeling!”

The other result was Iran – Azerbaijan 2-2.

England, India and China will be fighting for the silver and bronze medal in the final encounter. England will play Sweden, and China will play Kazakhstan. India will face an uphill battle when they play Russia.

We have an exciting match in round 9 which will feature two bitter political rivals. The USA calls Iran ‘The Axis of Evil‘ while Iran calls the USA ‘The Great Satan‘.

In the women’s section, Team China defeated USA 3-1 to win the Championship with one round to go.

China won the gold with a round to spare.

The fight for both other places on the podium is still open between Russia, Ukraine and Georgia.

In every chess tournament, there are a bunch of people who work extremely hard to ensure that the event receives the publicity it deserves. 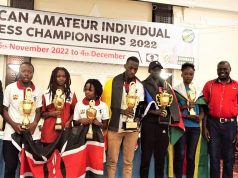