It is a well know fact that Mikhail Botvinnik is called the Patriarch of Russian chess.  In my opinion Nona Gaprindashvili can be considered the Matriarch of Georgian chess!  Her success at the chess board inspired thousands of Georgians to take up the sport.  Georgia is today considered to be one of the top ten nation in chess.

She was the strongest female player of the 1960s and 1970s and became the sixth Women’s World Chess Champion (1962-1978). Nona was also the first woman to achieve the Grandmaster title.

Gaprindashvili at the age of 20 in 1961 won the fourth women’s Candidates Tournament, setting up a title match against Russian World Champion Elisabeth Bykova. She won the match easily, with a final score of 9−2 (+7−0=4), and went on to defend her title successfully four times.

She won as many as 25 medals, among which 11 team gold medals and nine individual gold medals. At the Dubai Olympiad 1986, she won all the ten games she played.

During her career Gaprindashvili successfully competed in men’s tournaments, tying for first place at Lone Pine Tournament in California in 1977.

Gaprindashvili in 1978 became the first woman to receive the Grandmaster title. This was as a result of winning  1977 Lone Pine Tournament against a field of 45 players, mostly Grandmasters. Although she did not meet the technical requirements for the GM Title, this result was so spectacular that FIDE found it sufficient.

Well known chess author Tibor Karolyi has published a book with some of Gaprindashvili’s games.  The book published by Chess Evolution also has excerpts of an interview with her and some historic photos.

Georgia is a country in East Europe, located on the coast of the Black Sea.

Georgia has a population of 4.6 million people.

Tibilisi is the capital with 1.1 million inhabitants.

The national flag is white with 5 red crosses.

Joseph Stalin (born Ioseb Besarionis dzе Djugashvili) was born in Gori, in eastern Georgia.  He was the USSR leader from 1924 to 1953.

Players gear up for Nakuru Open 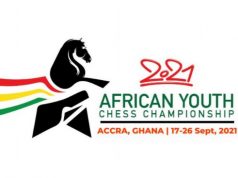 Players gear up for Nakuru Open

GM Fabiano Caruana is out of the 2021 World Cup