The Soviet Championships is a fine book published by Everyman Chess Classics. The authors of the book are Benard Cafferty and Mark Taimanov.

The Soviet Championships book covers the period from the first champion in 1920 to 1991 when the USSR broke up. All the famous chess elite took part in the events, including Alekhine, Botvinnik, Keres, Bronstein, Tal, Petrosian, Korchnoi, Geller, Stein, Spassky, Karpov and Kasparov.

The generous state support from the communist government ensures that the events were genuinely grand and spectacular. The round-robin events with about 20 contestants would generally last just over a month.

Each Championship has a complete cross table and a narrative about the event. The narrative contains several anecdotes from this vital epoch of USSR history. If you are a connoisseur of Soviet history, then this is one book that you must have.

For example, in the 1st Championship held in 1920, the players threaten to go on strike due to the short rations!

Besides, there is a carefully chosen selection of some of the most memorable games.

Included in the book are eight pages of black and white photos.

I think the fascinating part for me in this book was about Boris Spassky. He lost the World Crown to Bobby Fischer in 1972, which must have been an enormous blow to his self-esteem. He amazingly won the 41st Soviet Championship held in 1973 just a year later! That, for me, is an outstanding achievement under such difficult circumstances. The first time that he won the event was the 29th edition held in 1961.

Alexander Alekhine won the first edition of the Soviet Championship held in 1920.

Mikhail Botvinnik and Mikhail Tal have won the Championship 6 times each.

Vassily Smyslov was the oldest: he was 67 when he played in the 55th edition of the event held in Moscow in 1988.

Mikhail Tal was the youngest winner of a Soviet title.  He was 20 years and two months old when he won the 24th USSR championship at Moscow in 1957 (he won it again the following year).

Yefim Geller was the oldest. He was 54 years old when he won the 47th Championship in 1979.

Mark Taimanov, one of the book’s authors, participated in 23 editions of the Championships.

The last Soviet Championship was the 58th edition held in 1991 in Moscow. The winner were Arthashes Minasian and Elmar Magerramov, both relatively unknown players.

Anatoly Karpov made his debut in the event during the 38th Championship held in Riga in 1970. He ended 6th in ranking but 4th overall with 12 points from 21 rounds.

Here is another fascinating game from Anatoly Karpov.

Garry Kasparov was the youngest participant in a Soviet Championship. He was 15 years and eight months old when he played in the 46th Championship held in Tbilisi in 1978.

Benard Cafferty is a fluent Russian speaker and eminent chess historian.  He is a former editior of the British Chess Magazine and has spent decades researching Russian archival literature.

Mark Taimanov is a famous Russian Grandmaster who has annotated all the games in the book.  He has participated in a record 23 Soviet Championships and is a world class concert pianist.

Why chess was popular in the USSR.

How the Soviets made a GIANT chess board on the Palace Square. 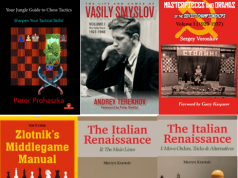 The Application of Chess Theory by Yefim Geller