In the Under 10 section tournament, Krishiv finished with 6 points from 7 rounds along with Prayan Gupta who, unfortunately, had a lower tiebreak score making Krishiv the overall winner. A total of 7 prizes—6 medals and 1 gift voucher worth KES 500—were awarded to the best 3 boys, best 3 girls, and best WeCCie (Westlands Chess Club member).

All prize winners in the U10 tournament:

In the Under 18 section tournament, Vyom emerged the clear winner with 6.5 points from 7 rounds, his only draw coming against second runner-up Zayan Zamir. A total of 3 prizes (of the 4 on offer)—3 medals and 3 gift vouchers worth KES 500—were awarded.

All prize winners in the U18 tournament:

Both the Under 10 and Under 18 sections saw 7 rounds being played at a time control of 15 minutes flat per player per game with Swiss system pairings (where players with roughly the same points meet each other in every round).

In the Blitz Open event on Saturday afternoon, Panchol had won the tournament with a round to spare and finished with 11 points from 12 rounds, his only defeat coming at the hands of first runner-up Griffins William Ongaki. A total of 7 prizes—KES 8,700 cash, 2 medals, and 2 gift vouchers worth KES 500—were awarded.

All prize winners in the Blitz tournament:

The FIDE-rated blitz tournament saw 12 rounds being played at a time control of 3 minutes plus 2 seconds increment per move from move 1 per player per game with Swiss system pairings.

A total of 25 players participated in the Blitz tournament from 2 to 5 pm, a majority of them representing Nairobi Chess Academy & Club and Oshwal Academy Nairobi (4 players each), followed by Anchor Chess Club and Premier Academy (3 players each), with other clubs having 1 representative each.

Organised by Oshwal Sports Complex and supported by Oshwal Education and Relief Board, Westlands Chess Club, and Chess Kenya Federation, the 1st Oshwal Nairobi Speed Chess Festival events saw the return of chess activity to the Visa Oshwal Community Nairobi after a gap of almost 5 years.

A FIDE-rated rapid open tournament that was to happen on 27th March as part of the festival has been postponed to Sunday, 10th April pending confirmation from the organising team. Details will be communicated in good time. 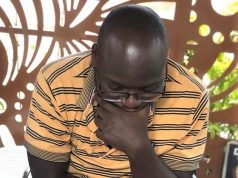