Ricky Sang, aka ‘Tricky Ricky‘, was in scintillating form to clinch the 64th Nairobi Chess Club Championship with a round to spare at the Braeburn School last weekend.

Sang obtained 5.5 points out of six rounds to go home with a cash prize of KES 25,000 (USD 200). On his way to victory, he defeated Chvoro Viacheslav, Felix Boera, the defending Champion James Panchol, and Ezekiel Matiko of Uganda in the first four rounds. On the last and final day, he dismissed Ian Mutugi in round five before sharing the spoils with Trevor Mulindi in the sixth and final round after a four-hour battle.

The Open Section had 18 participants competing over six rounds in three days for a prize fund of KES 55,000 (USD 500).

The U1600 Section saw 30 players competing over six rounds with a one-hour time control over two days.

Jadon Simiyu, a ten-year-old Moi Kabarak Primary School student in Nakuru, stunned competitors in the U1400 Section when he won with a perfect score of 6 out of six rounds. He went home with a glittering trophy and a cash prize of KES 7,421, which Noel Fumey of Togo donated.

Chris Wanjiru was second with 5 points, while Paras Gudka was third with 4 points.
A total of 30 players participated in this section with six rounds with a one-hour time control over two days.

Day One Report on the 64th Nairobi Chess Club Championship. 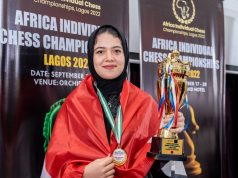 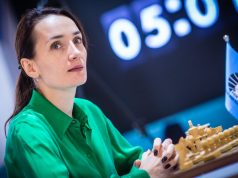