The Africa Junior Chess Championship 2022 will run from 12th to 20th November 2022 in Bejaia, Algeria.

The host invited two players (a boy and a girl) from each member’s country to fight for the coveted title – Africa Junior Chess Champion 2022.

The winner will earn the personal right to represent Africa in World Junior Chess Championship 2023.

He is among the fast-rising juniors locally. At 17 years of age, McLigeyo was the youngest to play in the open section for Kenya at a Chess Olympiad held in Chennai, India.

He only learnt chess in 2017 back in school. By 2018 & 2019, he was already causing problems to established players, finishing 3rd in the Kenya National Youth & Cadet Championships (KNYCCC) finals Under – 14 Boys category.

In 2018, he played his first international tournament for Kenya at the 10th African Youth Chess Championship (AYCC) Under 14 Open section scoring 50% from 9 rounds at the Grand Royal Swiss Hotel in Kisumu.

Expectations are high for Robert to score an excellent result in the event.

She finished second behind Erica Muturi in the 2022 Kenya National Junior Chess Championship held last month in Mombasa.  She earned the chance to represent Kenya in Africa Junior when Erica Muturi opted out due to a clash with her exam calendar.

Mercy has been the national champion on several occasions and is expected to establish her place in the ladies’ national team.

Join me in wishing Mercy and Robert all the best as they fly out the national flag. 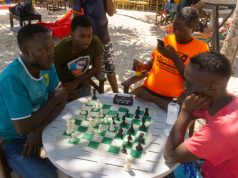